have always been an important part of the Dalvey range.  Every season we like to introduce something new in this area; for A|W ’15 it’s been the launch of the Clipper Clocks.

Over the last couple of years our two most popular styles have been the Voyager and the Sedan – both of which are ornamental, and to some extent quite mature.  We wanted to introduce a range that would be exuberant and light, and that would combine together to make a really expressive collection composed of unique individual characters.

The Clippers have an elegant simplicity and expansive, richly detailed faces.  I think everyone in the design department has a different favourite…

The black-with-orange - accents is quite satisfyingly “mean”, and employs the same aesthetic that we’ve found to work so well in many of the new additions to our leather range; the white reversal of this style has an appealing lightness, and is probably the most versatile of the group.

The rich blue with yellow accents has a maritime aesthetic in keeping with the name of the range; I think this was the first design to be approved by all of us, and drew some of its inspiration from the popular “oily” blue version of the Sedan that we launched last year.

The grey-and-rose-gold was a slightly unexpected style that we all thought worked really well.  So well in fact that we employed the same combination in one of our new Full Hunter Pocket Watches...

My favourite, though, is the turquoise: it has such a sunny, punchy effectiveness.  We’d always wanted to use a colour a bit like this in a clock design, but had previously thought in terms of duck-egg, or verdigris…  It had always been something retrospectively referential, and as a consequence, never quite seemed right.  The cool, mirror-polished numerals and alarm-hand on this Clipper combine with the super-vibrant turquoise to create an effect that we think is lively and contemporary. 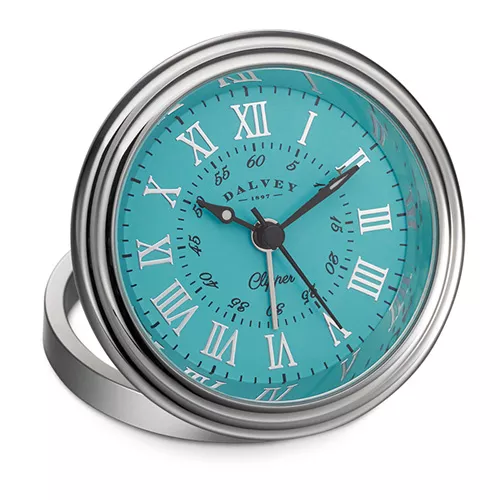 The range looks great when assembled as a whole, but its constituent parts make great little characters when sitting on their own – dotted about in a house or an office.  We’re pleased to have been able to introduce a model that’s lighter and more accessible than any clock we’ve previously launched.  I hope you like them – please get in touch to let us know which is your favourite: it’s always interesting to see which of a range of styles is winning, and helps to settle the (creative) arguments that rage within the confines of our studio…